THE SOCRATES OF PRAGUE 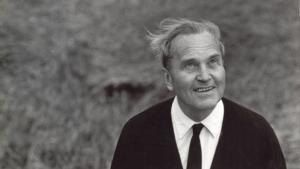 Jan Patočka (1 June 1907 – 13 March 1977) was a Czech philosopher. Due to his contributions to phenomenology and the philosophy of history he is considered one of the most important philosophers of the 20th century. Having studied in Prague, Paris, Berlin and Freiburg, he was one of the last pupils of Edmund Husserl and Martin Heidegger. During his studies in Freiburg he was also tutored by Eugen Fink, a relationship which eventually turned into a lifelong philosophical friendship.

In January 1977 he became one of the original signatories and main spokespersons for the Charter 77 (Charta 77) human rights movement in Czechoslovakia. For the three months after the Charter was released he was intensely active writing and speaking about the meaning of the Charter, in spite of his deteriorating health. He was also interrogated by the police regarding his involvement with the Charter movement, and on March 3, 1977 he was held by the police for ten hours, who had claimed that he would be allowed to speak in his role as a Charter spokesperson with a high-ranking official (in fact, this was a pretext to keep him from attending a reception at the West German embassy[2]). He fell ill that evening and was taken to the hospital, where his health briefly improved, enabling him to give one final interview with Die Zeit and to write one final essay entitled “What We Can Expect from Charter 77.” On March 11 he relapsed, and on March 13 he died of apoplexy, at the age of 69.

Theme by Anders Noren — Up ↑